Thanks to sys64738 of DDI for providing PCB files, parts lists and the disk containing File Combiner, a "Load and Execute"-plugin! Check out his Re-Capture at http://www.sys64738.net/ddirc/ddirc.htm

Capture was introduced to the american market in August 1985 (Capture September 1985 Advert) with an update to Capture II between mid 1987 and December 1987. Capture was produced by the Jason-Ranheim Company and widely distributed as Capture Archival Cartridge System due to its extra support for creating ready to eprom program output for the promenade C1 eprom burner. The hardware base for the cartridge never changed while the 1.0 software was upgradable to 1.1 (supposedly around mid 1986) and 2.0 (or II) by replacing the eprom (offered by the Jason-Ranheim Company as well).

Capture came with 8kb of ROM as well as 8kb of RAM and was second on the market of commercial freezing cartridges. Its software is simple but well done and due to its limited space uses up the eprom pretty well. What people will usually regard as lack of features makes Capture somewhat special since it should be extremely hard to detect by normal software. The main menu option LOAD-EXECUTE was at some time obviously intended to introduce additional software running off the cartridge RAM to the Capture platform but so far such software was not found. 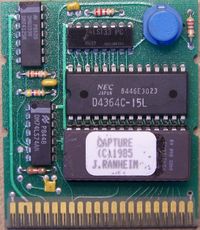 A comparison of the Capture II versus 1.1 ROMs has yielded that little was changed between these two releases. The freeze routine was improved by handling a timer differently and the cartridge menu being burned to eprom on the promenade got a few new bytes. Overall less than about $80 bytes got added from 1.1 to II and no obvious changes apart from a little text was done.

Memory dumps created by Capture are really what the name says - memory dumps with information on registers and program counter added. The description of the resulting file contents is well documented on the manual and easily allows later modification on the frozen program. Apart from this Capture does nothing else but filling the memory and dumping it in restartable form to disk, tape or "cartridge".

Along with a multiple of 2-kbyte files containing the memory dump there are files created containing the IO state of the C64 and there is an option to store the drive RAM as well. It should be noted that the drive RAM is not restored on reloading the frozen program though. Additionally disks containing captured programs are not easily file copyable since the cartridge is installing a few fast loader bits to track 18 sectors 15 and 18. You will need to copy these as well.

This cartridge is a true NMI-Freezer. On button press the NMI is triggered and through the NMI vector pointing to somewhere at the $FEXX page the computer ends up at $EAEA. Here the actual freezing takes place by storing registers to the cartridge RAM available during Ultimax-Mode at $6000-$7FFF.

Jason-Ranheim Company sold a variety of eprom related products for the VIC-20 already and produced the promenade C1 eprommer for the C64 before the Capture cartridge apparently. Capture was mainly advertised as a companion to the promenade C1 though it should be seen as stand alone product with an extra option to round the company portfolio. It should also be mentioned that the promenade C1 was cloned by several people and seen by many as the eprommer standard in the USA.

A simple plugin therefor can be created like this:

As the memory gets trashed anyhow the length of the plugin does not matter much.

The Warp Speed ROM dump is similarly crippled and needed decoding just like the Capture ROM dump - OK, no big deal since there are other examples of changing data lines as well but the relation is interesting trivia. :)