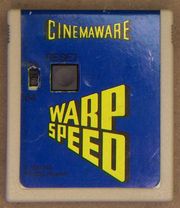 WarpSpeed created by the Alien Technology Group and distributed by Cinemaware became available in early 1988 and was pretty late on the general release already. All the reviews we found are dated late 1988 which might have humiliated it even further when being compared to other cartridges at that time. WarpSpeed has a switch to allow it to be used in C128 mode and there were two ROM versions found so far. The manual thanks the Jason Ranheim company who made the Capture cartridge - likely for support on the wiring mess up which requires a decoder to translate a raw eprom dump to a working C64 binary.

The advertising was especially boring since it was always the same advert on all magazines.

and notes the interesting information

Creating you own WarpSpeed cartridge is detailed at https://github.com/SukkoPera/OpenC64WarpSpeed

The WarpSpeed Source Code (originally found at iAN CooGs' site) remains separated from the above. Lord Crass' version working with Merlin128 is included instead.