From ReplayResources
(Redirected from Stardos)
Jump to: navigation, search 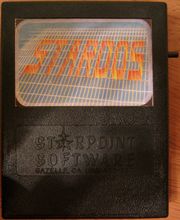 StarDOS sold by StarPoint Software who also distributed ISEPIC is actually a Kernal ROM replacement in cartridge format. StarDOS was designed by Bryce Nesbitt, Bruce Q.Hammond and Scott M. Blum and became more or less well known. It was however for a long time not on the net or emulated. As a special convenience the customer was asked for the powerup message and his preferred color setup when ordering the cartridge. Wether StarDOS cartridges with personalised ROM were actually shipped is not sure.

The cartridge comes with a clip that must be connected to the PLA of the C64 so it can correctly replace the kernal ROM.

The manual states a copyright of 1986 while adverts from 1985 might hint for several ROM or at least manual versions.

Cartridge and 1541 emulation in VICE are working. Some day there will be 1571 support likely :)

stardos.c at the VICE project page explains the StarDOS registers: