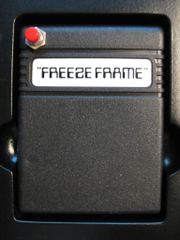 The Freeze Frame (FF) was written by Angus Ager and the hardware produced and distributed by the UK based company Evesham Micros (wikipedia:Evesham_Technology) which was fomerly known as Micro Centre.

A different Freeze Frame cartridge is described and pictured on a lemon64 forum thread. The cartridge shown there is a hardcopy cartridge to dump the screen to an attached printer. From the same thread it reads that until Freeze Frame MK3B the cartridge came without reset button and only the Freeze button was present which even has a function from that version on.

There were several versions of the Freeze Frame (MK.I to MK.V) and its' followup Freeze Machine (MK.V) (which for better readability will go by MK1 to MK5 here to avoid roman numbers). Hardware changes to double the ROM size happened from MK1 (8kb) to MK2 (16kb) as well as between MK3b v1 and MK3b v2 (32kb possible). This latter v2 version still comes as 16kb only ROM though. It appears to be a strange moment to change the hardware in the middle of the software versioning. Maybe they feared to break things too much here and there? The full 32kb hardware "potential" (this is a freezer based on ROM only like Final Cartridge still) was then used by the Freeze Frame Lazer and the added Reset Button received a functionality.

The sole purpose of the Freeze Frame series is to aid in creating backups of software. The backups are saved to disk or tape whereas disk saving allows to choose on whether reloading shall happen fastload supported or not from MK2 on. Freeze Frame MK1 to MK5 (Fastload mode of FF Lazer and FM) create normal PRG files while the Lazer/Machine mode introduced after MK3 uses all output options to save to WARP*25 alike USR files. (IMPORTANT NOTE: Use the best disk emulation you can get by utilising G64 images when trying these freezers.)

Up until MK3 the cartridge only served as backup device with few added functions to clear the ram, directory and DOS wedge, format disks and transfer files from tape to disk. A manual version talks about the "U" key as reset option on either MK1 or MK2 (not stated on manual) but no found version up to "MK3B" has that "U" key actually mapped.

From MK4 on (named officially Freeze Frame Lazer) it is important to understand that the RESET BUTTON switches between the two available and largely identical 16kb ROM banks. With MK4 Mr. Ager finally added a Fastload BASIC extension allowing quicker loading and DOS wedge commands in general. The Lazer/Freeze Machine mode on MK4 and MK5 is the only mode which can load back the USR file backups made with those modes as only those support the Warp25 alike clone file loading. It is worth noting that the USR files created here are *NOT* file copyable, *NOT* scratchable and the X-Convert option which some of you might have spotted only converts existing PRG files to "USR"-Warp25. Keep that in mind when selecting the ROM bank for creating the freeze :)

Freeze Frame Lazer states Incorporating Mk IV Freeze Frame to quickly become Freeze Machine practically being Mk V and Lazer MkII as the packaging subtitles. This honestly expresses the evolution and doubling of the banks here. Reset is used to switch between the two existing 16kb banks then. The two banks represent the modes being Freeze Frame and Lazer/Freeze Machine and affect how backups are saved to disk.

While the Lazer didn't work well on some tests we made the Freeze Machine gave ok results and even single file saving of backups become possible as the multi-file freeze format got changed. Snapshots will be split when becoming too large. Lazer/Freeze Machine are quite obscure cartridges on which lower and upper 16kb of the cartridge consist of much of the same code (as the FAIME Retro Computing Page (archive.org capture) has found before) with the fast saver and loader extended by that Warp25-alike saver and loader. Freeze Machine v2 and v2plus add the Game Killer and Pokes even! (With a debatable success rate, ahem.)

It appears that at no point the Freeze Frame creators thought about extending the C64 functionality the way the competition went. Apart from the most basic things frozen programs cannot be instantly restarted, a monitor was not included and not even simple basic utilities were provided. Quite a disappointment for an overall 32kb ROM. 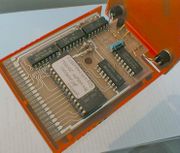 We cannot currently judge all of the F.F. Utility Disk contents but at least "2.0" just contains a couple of patching programs for common games and loaders.

It may not be obvious to the average user, so: On powerup and until MK4 also on plain reset the initial border and background color is RED. That is supposed to tell the user that the computer memory was not cleaned so far. After "CONFIGURE MEMORY" the border and background turns BLUE. Often a cleaned memory is required for freezes to be successful since the un-freeze routines require free space to work without cartridge support.

Freeze Frame/Machine's original producer Evesham Micros was a UK based company. This advert (taken from the Lemon64 gallery) shows that there were production runs in (South) Australia as well and the binary package reveals that a text string was changed to match MICRO ACCESSORIES OF SA. Whether the copyright holder Softcell licensed the ROM to these two companies and how the author was involved in all this is unknown. If you can supply additional information, please let us know!

The VICE project page has on freezeframe.c:

The VICE project page has on freezeframe2.c:

Thanks to GRG, GenerationCBM, kaosOverride, Zer0-X and HOK for several missing dumps. Special thanks to MaD ][/SSP for the MK1 Blueberry clone dump! Thanks to fluggi242 for closing the gap with his MK2 dump! 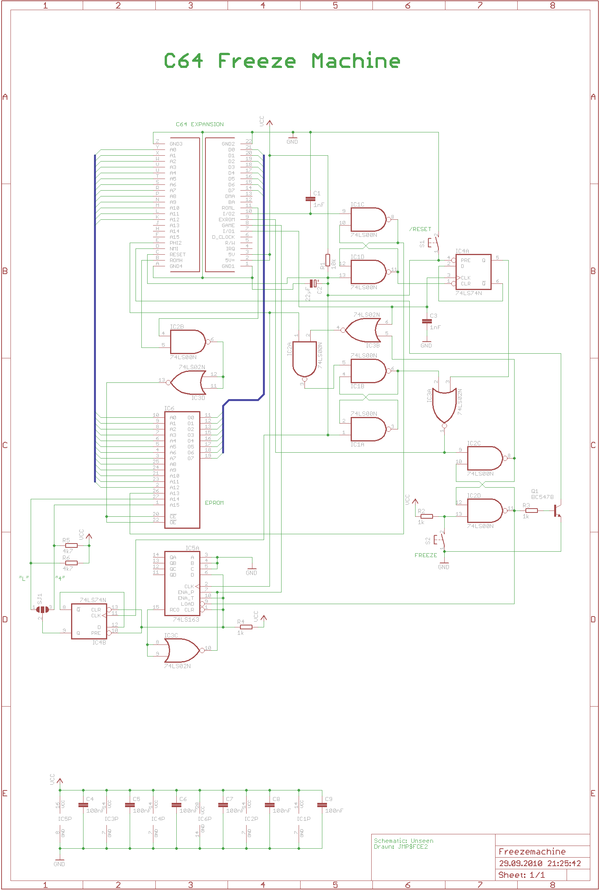 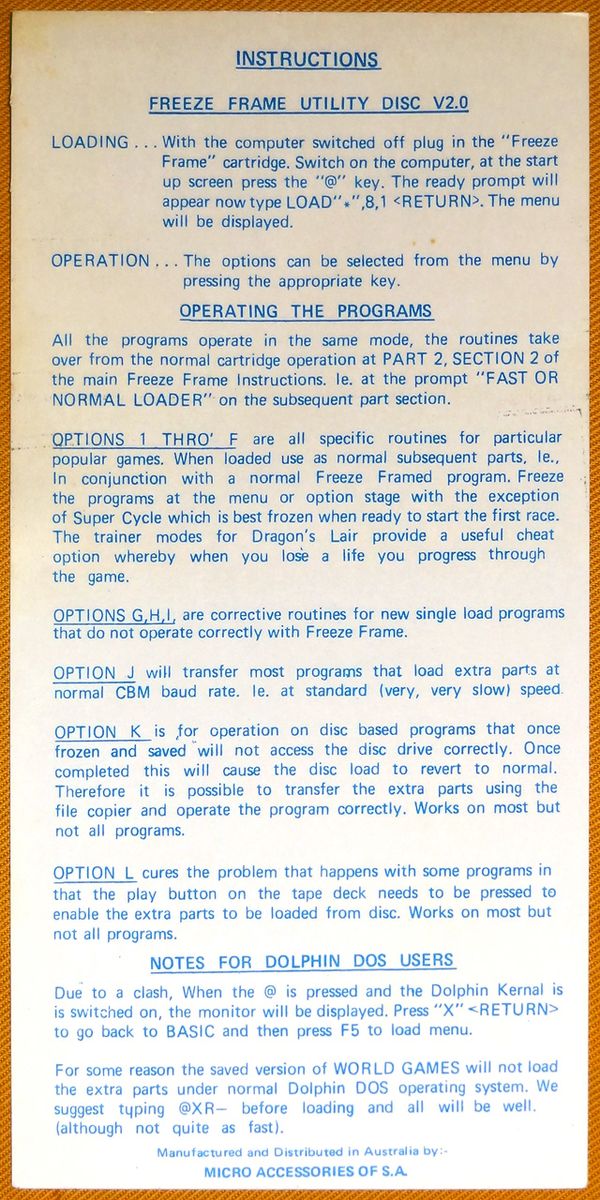