From ReplayResources
(Redirected from DolphinDOS)
Jump to: navigation, search 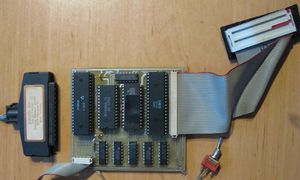 Dolphin DOS is a Kernal ROM (and drive ROM) replacement utilising a parallel cable. The speeder was delivered with the kernal switching board for the C64 and a board for the 1541.

German readers should check the articles under Weblinks for a full blown read up on Dolphin DOS. This article will be revised somewhen later.

The following interview is translated from the german original text which can be found at http://www.tim-schuermann.de under Dolphin DOS - Flinker Delfin

When did development begin in 1985? What was the motivation respectively how was the idea born? How did the developers get to know each other?

We (Günther Jilg, Michael Priske, Ralf Köhler and me (as well as some others)) were a group of C64 enthusiasts who started to meet regularly for information exchange - usually at Günthers' appartment in Frankfurt - in 1984. Over and over we thought about how to increase the data transfer speed between C64 and floppy. Günther finally figured out that when reading a complete data track during a single revolution of the disk in the disk drive a tremendous speed up could be gained. The basic idea was born - now it had to be realised. I started developing a board which held a chip with 8kb RAM and a 32kb EPROM so Günther had space for programming. By the way: from the very beginning we wanted to have a low priced hardware which does not needlessly raises requirements on the already heated 1541 as Prologic DOS does which operates at 2MHz clock speed. So this was calling for Günthers programming skills and tricks and just a few months later results were coming to light.

When was the first Dolphin DOS version released? January 1986?

Yes - this version was only available to very few people - including the Markt & Technik publishing company.

What was the difference to the successor Dolphin DOS 2.0?

A few hundred pieces of Dolphin DOS 1.0 to be inserted into the CPU 6502 socket existed. As a cable a Speed DOS compatible cable was used (meaning you could continue using your already installed Speed DOS cable). Already by the middle of 1986 version 2.0 was released which moved the 6522 VIA to the board and the cable was attached to the board as well.

Why was the company renamed several times?

I registered a sales agency in July 1985 and later named the company "Dolphin Software". When even later undertaking other tasks the company part involved with Dolphin DOS was renamed to "Dolphin DOS-Vertrieb".

Were there Upgrade Kits?

No, the software was well engineered from the beginning. That's what we were proud of especially.

How large or massive was the trouble with pirates? Is the (monetary) damage caused by piracy assessable?

We never did an estimation. Once a few pirates went too far, so customers were complaining and nearly insulted us for the poor quality of the product. This actually led to filing a complaint and the clones were confiscated. Pirates cloning a Dolphin DOS for themselves were not troubling us as many of them were neither not willing or not capable to pay for it anyways. We turned a blind eye as long as nobody turned it into a business.

We did not release a Dolphin DOS Plus. Maybe a changed pirated copy.

When came the end for Dolphin DOS and why did it come?

That was about 1990 when Amiga and PC were taking over and the C64 business dropped. Finally it took too much time to keep up the hotline and when I started business on UPS (Ed.: Uninterruptable Power Supplies(?)) I had to decide with a heavy heart to close the business that gave me fun and joy for five years.

How many units were sold overall?