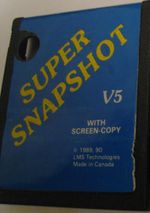 The Super Snapshot series was started with the introduction of the Snapshot 64 by the end of 1985. The Snapshot 64 was following the Codebuster freezer which names ISEPIC on the manual already hence we assume availability of the cart between spring 1985 and end of 1985.

Three canadian based companies were involved in distribution of the Super Snapshot being Marshview Software Ltd., CSM Software Inc. and LMS Technologies. During the evolution to SS5 the copyright was always kept by LMS Technologies while e.g. Software Support International (SSI) was distributing the cartridge in the US. SSI was also selling a ROM replacement named SYSRES so the user was able to swap EPROMs on the (likely) SS3 and SS4 hardware to suite his needs. (Ed.: Sounds a lot worse than cartridge swapping.)

At this point - many thanks Ron Smith for answering a few questions to us and clearing out some things - sorry it took so long to implement this interesting info:

Ron Smith: Codebuster and the Snapshot series were always the sole copyright of LMS Technologies. LMS was an acronym for LeBlanc, Moleman, Smith. Marcel and I designed and wrote the software, manuals, ads, etc. Gerrit Moleman owned Marshview Software. Marshview Software initially was the Canadian distributor for all of our products while CSM handled distribution for Codebuster and Snapshot64 in the US.

pokefinder: How many codebusters and s64 to SSv5 were sold in Canada and the US?

Ron Smith: A lot :-). We were young and inexperienced in that area and made a few mistakes that cost us dearly in hindsight. You may find it interesting to know that we came close to finalizing a deal with Commodore that would have seen a SS (minus the program backup feature) packaged with every 1541 drive. It fell through because Commodore was launching the Amiga and did not want any distractions.

pokefinder: Was PAL compatibility ever an issue for you?

Ron Smith: Not really. A bit but that was looked after by the Datel programmer during our relationship.

pokefinder: We found the Action Replay to use Snapshot 64 as a base for future development. Though we did not check the hardware yet, just the software. Did Datel ever ask for permission or get a license for using its code (and possibly the hardware)?

Ron Smith: We actually partnered with Datel for a while so yes we knew they were using our code and actually selling our product for awhile.

Ron Smith: ISEPIC was first by a few months. Their hardware was completely ram based and had limitations because of that fact. Codebuster/SNAPSHOT 64 was rom based while all of the Super Snapshot series was rom and ram. The product was also sold for a very short time under the name of Clonebuster (or something like that ... it was a US company and we parted ways quite quickly). Another tidbit is that our SCREENCOPY module was originally called PHOTOCOPY. Somebody else was using that name so we had to change.

pokefinder: Thanks again for the nice background info, Ron!

Nowadays the copyright is said to be held by PBM who either ignored or junked our emails - maybe someone else wants to point him here and make him contact us - we trust Ron Smith on the issue and suppose the copyright is still with LMS Technologies.

Many interesting features were added making SS3 to SS5 serious competition towards other prominent freezers at the time. The manual states Super Snapshot was designed and written by Marcel LeBlanc and Ron Smith. Quite a few features were added by other people such as Matthew Desmond (author of Desterm -> (Snapterm for SS5)), Richard Bond (Turbo25), Steve Boyko (Sprites), George Taylor (Samples), John Finaly (PAL fixing) - resulting in 64 kbyte of a nicely interfaced and well thought multi function cartridge.

Super Snapshot documentation always was quite complete and the wiki contains a large deal of it so we will save all of us the trouble of a complete feature rundown. However, a few noteworthy options should be mentioned here. Since at least SS3 the command @TV displays the current ROM version with PAL added whenever the ROM was fixed. Minor version numbers were so far only seen with the SS5 series on which even two different v5.22 PAL versions exist. The Super Snapshot v5.22 v2 PAL carries additional fixes for the Snapterm part which likely were not quite right in the first attempt. The SS5 hardware change not only added more ROM and the RAM extension option (including software support) but also made it REU compatible. Monitor can access the REU (though the manual doesn't mention how to e.g. transfer REU memory to C64 RAM.) and copiers takes advantage of it as well.

It may entertain some people to take a look at the very first CODE INSPECTOR (the Super Snapshot monitor) on the Snapshot 64 ROM which has four commands (Jump to, Memory view, Load and start ML prg, Return to basic). Nevertheless the strings CODE INSPECTOR and (c) 1985 LMS TECHNOLOGIES also appear on Action Replay MK2 and MK3 ROMs.

Last but not least one may wonder why on so many ROM updates no developer ever got the idea of unifying the process of leaving a sub menu. RUN/STOP may have served an excellent purpose here. Instead the user is forced to leave one menu by pressing "3", another one goes by "4" and yet different ones by "5" or even higher. There must be some obvious reason - we just don't get it.

The following is cited from snapshot64.c found at the VICE project page:

SuperSnapshot v3 should be compatible to this - the info is somewhat lacking though. supersnapshot4.c:

Super Snapshot v5.x emulation is handled by supersnapshot.c and reads:

Finally an excerpt from a posting by Tom Cwikla on comp.sys.cbm: