Power Cartridge by K.C.S. (Kolff Computer Supplies BV) became available in Europe in the middle of 1986. Several companies distributed the Power Cartridge in various countries in the PAL domain and it seems the cartridge never was sold in the USA. In Europe however it was available for over 6 years and the only thing that apparently changed once of twice was the foreword on the manual. The Power Cartridge came without any version numbers and the sprites at startup and in menu clearly state "1985". It seems that alone has protected the cartridge from getting even a pretended update by the copyright owners somewhen later. KCS as a company seems to have moved on to Amiga and apparently no updates on the hardware or software were ever developed. 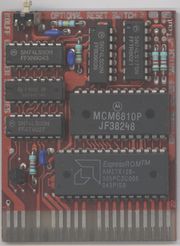 The manual situation is somewhat interesting as well. The english translation of the "Nederlandse handleiding" is available as etext but we found no original english documentation as of yet (HELP!). Power Cartridge manuals we have seen were bundled as german and italian or as dutch and french where each language occupies half of the booklet. The back cover of the dutch/french booklet comes with an english cheat sheet while the german/italian version appears to go by german on the back cover. Apparently there is an english manual available which has the C64 picture changed to show a cartridge with some flashes towards it. We are not sure wether it it may contain a spanish back cover though.

Power Cartridge ROM is definately packed with feature and the average programmer will not want to miss it but the cartridge sure could have used a few smaller improvements over time. During quite a few years it was always mentioned along the big ones, Final Cartrige, Action Replay and Super Snapshot but was surely outfeatured by any later competitor.