Thanks to The Git for the early V1.2 dump and whoever supplied the Formel 64 german manuals!

Magic Formel is the successor to Formel 64 and dictated the name for this due to Magic Formel being more popular. Released by the german company Grewe Computertechnik towards the end of 1986 with a heavy ROM load of initially 32 kbyte later rising to 96 kbyte even and a solid 8 kbyte RAM the cartridge had everything required to become a real success. It didn't work out too well though. Due to several bugs on the ROM and general incompatibilites many advanced users did not seem to like Magic Formel. The freezing capabilities provided were not too advanced with monitor, hardcopy and snapshot but the basic requirements are perfectly handled. 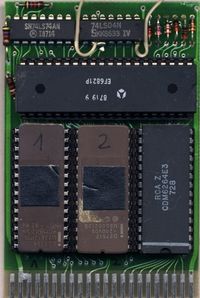 While the freezer lacks some comfort the monitor and basic extensions are pretty complete. Tape and disk speeders can be compared to most other cartridges (note the fastload bug described on 64er July 1992!) but the exclusive specialties advertised are much of a disappointment. A multicolor paint program and a massive textprogram with included 80 character support may rise some interest when first being used but many users will likely have ignored these functions since humans tend to prefer what suits them best. Hence external tools usually get loaded. Additionally all the error messages and the menus found on the v1.2 version are english when out of a sudden all of the text editor program is using german language.

A 2-pass assembler is included on the cartridge as well and apart from personal preferences about full screen editing versus line editing of assembler source code this functionality might sometimes be quite useful.

Here we go with some things left out on the manual we felt noteworthy. Information was gathered from 64er January 1992, 64er July 1992 and the 64er Produktführer 1993. Please note that the Produktführer article is a copy/paste work of the 1992 articles.

Some sort of "UNDO" is possible even on many harsh crashes by freezing and restarting before the expected crash. On crash just reset and hit RETURN two times. This restores the last frozen state - of course not all of the C64 memory is preserved, but the main important portion.

formel64.c from the VICE emulator reads:

The following is shamelessly ripped from magicformel.c from the VICE emulator. Most of the text was written by Groepaz:

The following is a rough assumption and does _NOT_ cover all the possibilities of the hardware. However this base info can be used to write a dumper without too much hazzle. Translation of the relevant parts:

The Cartridge is activated at $e000 and uses the whole IO area from $de00 to $dfff.

The following are wild guesses and require validation:

Write of $ff to $df00 Reenable the normal kernel