The Action Replay cartridge series developed by Datel was released in the middle of 1986 and got several updates during the years. MK1 and MK2 likely (we cannot confirm this yet) share the same hardware base and are direct branches of the Snapshot 64!

The base for the MK1 freezer obviously has been the Snapshot 64 ROM which underwent only minor changes on the freezer part. The MK1 and MK2 ROM dumps are not carrying version numbers so there is some guessing involved which explains our labeling of the binaries in the archive with MK2 v1 and MK2 v2. Those may well be MK1 and MK2.

MK3 introduced a hardware change and the ROM was largely rewritten. It appears the continous usage of even tiny menus on the earlier available Final Cartridge I and II encouraged the developers to add such things as well. It appears the same hardware was used for selling the DISK MATE on which the button was replaced by a switch as the Disk Mate software did not support bank switching. To add to the mess Datel also sold MK3 carts on which the Fastload was named Diskmate.

MK4 extended the hardware even further so it now allowed banking. The ROM size was doubled from 16 kbyte to 32 kbyte with this update. We could really use some high quality pictures of this hardware so some comparison to the MK3 board can be made. It appears the base board could have been the same even though the control register differs.

v4.x, as we call it, carries 32 kbyte of ROM and finally got 8 kbyte of RAM added. There are several different versions of this hardware but they all work and act the same (see also: Action Replay v5/v6 Tech). This hardware requires one of the commonly known v4.x, v5, v6 or other hacked firmwares to operate and this hardware is most likely what you are looking for or owning in regards of original hardware. Most Action Replay ROMs found on the net will meet these standards and of course the archive below aims to be as complete as possible. :)

The Nordic Power being a Datel hardware production and some other companies' collaboration work can even be seen as a small hardware successor to the Action Replay as Nordic Power adds another mode but remains compatible to the original AR hardware. Compatible enough to run original AR v4.x ROMs as well. 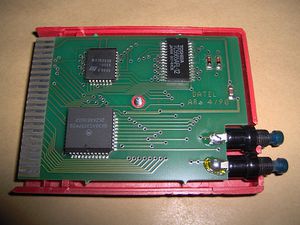 Said release of the v4.x hardware and software quickly made the Action Replay and its' various clones a de facto standard for most c64 sceners and users.

English PAL and NTSC versions starting with 4.1 up to 5.0 and 6.0 share the same hardware base, meaning the ROMs can be modified and cross-used. Any Pro or even Professional doesn't really mean anything here.

There are several sub-versions of the english 5.2, but they strangely enough appear to be changes from the 4.2 versions without the major code update which happened towards the official 5.0 version. This seems to be partly caused by incorrect or confusing numbering from Toolkit and fastload version numbers.

From 4.2 to 5.0 the screen text editor on the freezer was added along with some basic f-key changes. Several bugs were removed and some added as well. The 4.2 versions do not contain Freeze- and Break-Points or the possibility to restart the loaded parameter files, but these versions come with the novaload copier.

Version 5 ROMs contain several bugs which were introduced with the Freeze- and Break- Points. ZAP was removed from the Basic Extension aswell as the Novaload Copier from the Toolkit menu. Finally the Pokefinder was added along with the screen editor in freeze menu.

Version 6 ROMs which were sold and spread the most as it seems, contain the same bugs as the version 5 ROMs but are reduced message-wise on the nova load copier and extended only with the new copyright message. There was no major code change towards this revision so sticking to v5 on older hardware is probably the best idea. There also is no NTSC Version of the v6 ROM. To use at least a portion of the fast loaders on an NTSC machine equipped with Action Replay 6 the command @k- can be used to switch to the slower fast loader of the cartridge. However, that loader is less compatible so often OFF is the final solution when requiring some other cartridge function on an NTSC machine (e.g. the monitor).

The Triad, Fairlight, Triumwyrat and alike mods found on the net are basically just text changes, FKey changes and sometimes 'Are You Sure?' removed. The binary archive is sorting these under ROM Clones. Other known ROMs are not really worth mentioning except for some german versions which are straight translations without code changes mostly and obviously were created for commercial purposes.

Quite early Datel started distributing additional software for use with the Action Replay as can be seen in this advert. A recent thread at lemon64 has shown that we were not up to date with the software situation and not even aware of the copy protections that came with the MK4 and MK5 disks!

Many thanks to Diestro for providing original and deprotected images as well as additional information to complete the collection. Note that you will have to use the "deprotected" versions or the G64 image to be able to start a tape to disk transfer. Additionally make sure to use a standard kernal with tape routines, etc. :)

It has turned out that Datel themselves seemingly wanted to give up on the copy protection (as it was probably limiting their distributors to copy the disks) which became a free add-on to Action Replay MK5 and later sales. To deprotect the MK5 disk they of course went the Action Replay way to freeze the main program and copy all subsequent files. Turns out this wasn't too successful and any tape to disk copy attempt will fail when using the original parameter disk. Master created a defrozen and deprotected version of that MK6 freeze which is working just like the "deprotected" MK5 version.

The MK2 disk we found has the never changed multi-menu v1.1 created by dosoft along with its parameters and copiers. With the MK3 time things started to split and mix it seems. E.g. "pro-sprite" can be found on the always unchanged Graphics Disk as well as on the parameter/ulities disk. To complete the software compilation here, several "Mega Disk" and a "Mega Tape" version by dosoft were also added to show the origin of multi-menu. It appears that "Mega Disk I" is missing data from an original disk though.

An Extension software can to be loaded while being in the freezer menu of an Action Replay (v4.x+), a Nordic Power or a CyberpunX Replay. Such extensions will enable you to run small programs in the context of the freezer and do something to the frozen memory even.

The following is shamelessly ripped from actionreplay2.c from the VICE emulator. Most of the text was written by Groepaz:

The following is shamelessly ripped from actionreplay3.c from the VICE emulator. Most of the text was written by Groepaz:

The following is shamelessly ripped from actionreplay.c from the VICE emulator. Most of the text was written by Groepaz:

Note: Any I/O1 read access (that is $DE00 - $DEFF) will crash a C64 with Action Replay hardware enabled! Emulators tend to not emulate this feature.

The last board revision has a custom chip instead of the TTL logic and often but not always a mask ROM instead of the eprom. There have several Action Replay v5 firmwares been spotted on old and new hardware. Basically you are better off with the eprom version which allows modding whenever you are interested in such things.

All of the technical description of the Action Replay 4.x series remains unchanged for v5 and v6.

NOTE: For better control on the v4.1+ version mess there are TWO version numbers given. The Powerup version first followed by the Fastload version.

Branch ROM means that the dump was taken off a cartridge of which there are signs of commercial availability.

Clone ROM is a hack of some sort not licensed of authorised by Datel.

are also included on the all-package: